Convert an old RC Transmitter to control an RC Simulator

August 06, 2018
I finally wanted to get into RC planes. Almost 20 years ago I built a glider (The Spirit from Great Planes) and never flew it because I had no experience in flying and I disliked the idea of blowing up several weeks of work in a couple of seconds. When I recently came across the Flite-Test site and saw their foam-built planes, I thought that I could try to build one of these. I downloaded the plans for the FT Simple Cub, grabbed some foam and started building it from scratch. 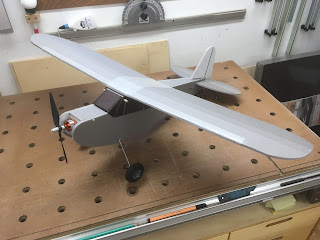 While building it, I thought it might be a good idea to check out how RC simulators evolved in the past 20 years. After some research, I decided to buy a basic version of the AeroFly RC Simulator. It appealed to me, because of its price and for one special feature: the permanent ground view which largely enhances the orientation of the pilot, especially during the landing approach.

After installing the program, I grabbed one of my kids' PS4 controllers and started to (sim-)fly around. Very soon I discovered though, that the feel wasn't right. The next step was to look for a way to connect my newly acquired FlySky FS-I6X transmitter to the simulator. Unfortunately, the FS-I6X has no USB connector to hook it up to the computer, but some more research revealed that the trainer port can be used together with some virtual joystick middleware: SmartPropoPlus. I than grabbed a SVGA (or PS/2) plug and a mono mini-jack and soldered the required cable. 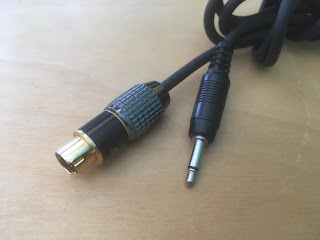 The way this works is, that the PPM output of the transmitter is fed into the audio-input of the computer where it is sampled by SmartPropoPlus which sends movement data to a virtual joystick device. The RC simulator sees a regular joystick device mimicked by the vJoy device driver. So far so good! But, the resolution was poor and random glitches introduced some weird behavior during flight.

Wait! I still have an old Hitec Flash 5 transmitter lying around. As I did not plan to use it anymore, it was time to re-purpose it. It has 4 potentiometers on the two gimbals, 8 trim buttons and 4 switches, one of which is momentary. It quickly became clear, that an Arduino Nano could do the trick to handle all these Inputs.

The hardware conversion of the transmitter took about 2 hours and the result looks like this: 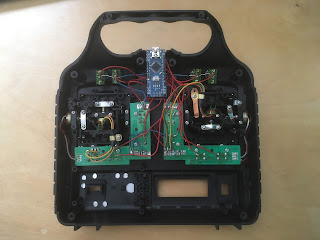 The software consists of a simple Arduino sketch to read the potentiometers' and switches' states and transmit them over the serial port in a compact text format. This text stream is read by a python script, decoded and fed into the vJoy device driver with this library.


Now, the transmitter, well the Arduino Nano, plugs via USB into the computer and the Python script can be run in a terminal window. The resolution and precision have greatly increased and flying became very precise. After several hours of "training", I went to a nearby field and gave my plane its maiden flight without crashing! 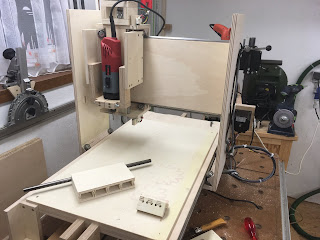 CNC machines have fascinated me for a long time and I've already built two prototypes. The first one was loosely based on a tutorial series by buildyourcnc. Unfortunately the tutorial series is no longer visible on this site. It was a fairly simple machine, but the incremental process of putting it together with simple tools was very interesting. The machine I've built was never finished and I gave up for more than 10 years.

Two years ago, I stumbled over the stepper motors and the driver board from the first machine and I decided to give it a go. This time my goal was to build a simple machine without expectations for high accuracy nor speed. I just wanted to try out a new software toolchain with Fusion360 at its center. 10 years ago, that kind of integrated CAD/CAM software was out of reach for an amateur. With Fusion360 being free for hobbyists, there was no more reason to not jump into the CNC rabbit-hole.